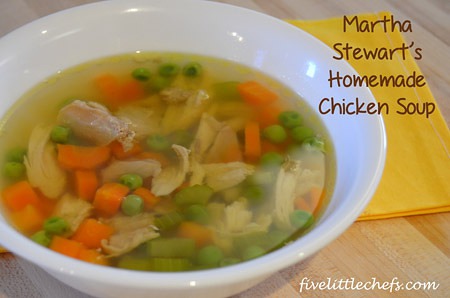 We initially thought making Chicken Soup would be easy now that we have the stock. Well…perhaps it would be, but in following the directions in the Martha Stewart’s Cooking School Cookbook

it wasn’t that easy. We made stock again, but this time we cooked the meat in the stock. So, we did two things at once. Maybe that made it a little better?

Once the chicken was cooked, shredded and the stock was strained as explained in the cookbook we refrigerated it all and went off for a few hours. When we came back we reheated the stock, added in the cut vegetables (another great opportunity to practice chopping skills). This was the easy part of the cooking. 20 minutes later we were at the dinner table eating our soup. That is about as long as it takes to get the table set and everyone in the same room sitting down. Though I do love it when they gather more quickly because then I can say we have another 5 minutes before dinner go do one of your nightly jobs! The jobs get done each night, but when they are finished before dinner vs. after dinner there is much less prodding.

My Little Chefs finished off all the soup! However, they did say the flavors were too bland. Actually they said “next time we should add some spice like cumin or something else.” Maybe we eat too many spicy foods so a mild chicken soup doesn’t have enough of a kick for them! Just wait kids…Tortilla Soup is next!

How We Cut Up A Chicken

No Replies to "Chicken Soup"