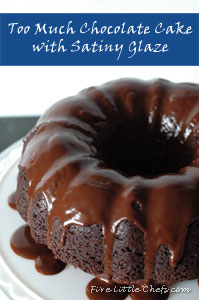 Too Much Chocolate Cake and Satiny Chocolate Glaze

Today’s post really should be named Questions. What does this do? What does that do? It made me feel not very smart. I didn’t have the answers. I think we need to become Alton Brown students  because he is so good at explaining the purpose of each ingredient.

I have made this Too Much Chocolate Cake recipe once before with rave reviews. It is simple because it is made with a boxed cake mix and some extra additions. We were going up to Grandma and Grandpa’s house for family dinner and one of our jobs was to bring dessert. Since it is Little Chef D’s birthday coming up she thought this was HER birthday cake. Kind of, sort of. We do celebrate the birthday’s when we are all together and sing, but this cake did not need to be decorated like a birthday cake.

Little Chef A cracked the eggs. “What does eggs do anyway? Maybe it give it some type of texture. Oops I got a shell in there!” She then realized how hard it was to get a shell out of the bowl! After trying for a while she wanted me to take a turn.

Next she poured in the pudding mix and the cake mix.

Water was also added which prompted the question, “What does the water do anyway? It doesn’t have any flavor.”
After stirring for a minute Little Chef A said, “It still has lumps.” I got out the hand mixer to help. It is a pretty thick batter. “Oh, that’s a whole lot easier. I love this thing.” When I ejected the beaters into the sink she said, “That’s really cool!” I guess she has never seen that before. But I did impress her!

After pouring pouring the batter into the sprayed cake pan we realized we forgot the chocolate chips. In contemplating what to do. Little Chef A said, “That’s ok we don’t always have to follow the recipe.” So we didn’t. We put the pan in the oven. Our cake today will not have chocolate chips in it.
Little Chef D saw the cake pan and asked, “Why does it have a hole?” I responded, “It is a different shape.” Then her funny comment, “Like egg in the hole.” Both do have a hole in the middle. Who knew that such a simple thing as changing the shape of a cake can prompt so many questions.

We took the cake to Grandma’s and make the Satiny Glaze there. Before measuring out the corn syrup Little Chef A asked if I sprayed it because it is easier for it to come out.

After all the ingredients were added she put it in the microwave. After 45 seconds it was stirred and popped back in for a little more.

When it was done she poured it over the top of the cake.

The cake was a little different from when I first made it, but yet it was still good. I did miss the chocolate chips. The glaze was not quite perfect, in fact it crumbled and fell off, but the cake was still good without it. The next day we ate the cake with a dusting of powdered sugar. My Little Chefs thought it was perfect!

Too Much Chocolate Cake

9 Replies to "Too Much Chocolate Cake and Satiny Chocolate Glaze"