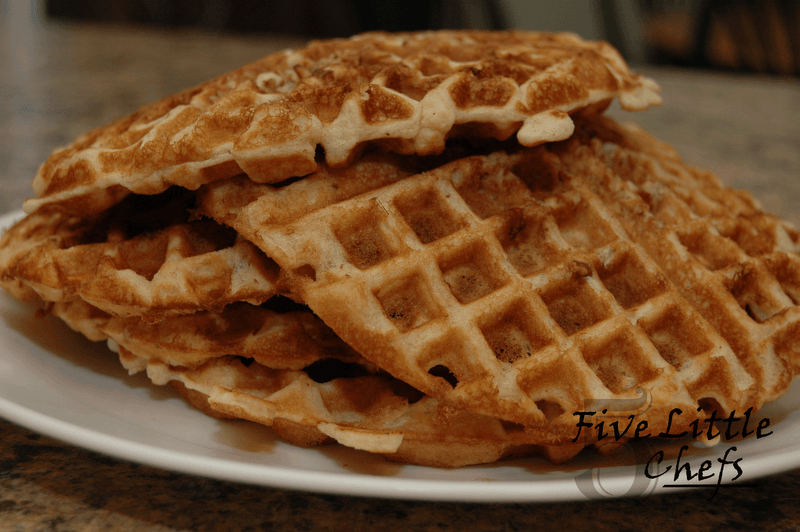 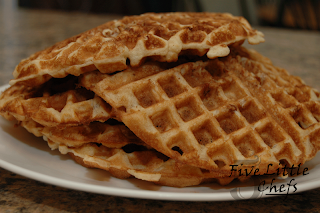 The pecans were placed on a cookie sheet and baked until toasted.

After they were toasted, Little Chef D used the hand chopper and easily chopped them into smaller pieces.

While the pecans were toasting she measured the ingredients.

The butter and shortening were added to a bowl then put in the microwave to melt. Afterward, the bowl was set on the counter to cool.

The dry ingredients were combined and whisked.

Little Chef D cracked the egg, then yelled to her sisters, “I did an egg all by myself!” She was skipping and dancing and yelling so proud of herself wanting to impress her sisters.

She measured out the vanilla, with some help. Little Chef A said, “It smells so good. I love that smell.”

The wet ingredients were added into the dry and combined. When she was mixing she said, “when I don’t hold it [the bowl], it [the bowl] goes around.

The batter was a little lumpy.

Little Chef D didn’
t want to pour in the batter, she wanted to sprinkle the toasted pecans. She was so careful it took so long for her to put a single handful on top. After this first one I explained she needed to sprinkle the toasted pecans all over the batter so that each bite could have some. She understood and afterward did a much better job with even distribution.

“You must have put too much batter in there.” said Little Chef A.

Preheat the oven to 350 degrees F. Spread the pecans on a baking sheet; bake until toasted, 5 to 7 minutes. Let cool, then chop. Reduce the oven temperature to 200 degrees F.

Whisk the flour, sugar, salt, baking powder and baking soda in a large bowl. Whisk the egg, milk, buttermilk and vanilla in a separate bowl until combined. Stir the egg mixture, melted butter and shortening into the dry ingredients until just combined. (The batter will be lumpy.)
Preheat a waffle iron and brush with melted butter. Ladle some batter into the iron (about 1/2 cup, depending on your waffle iron); sprinkle with 2 tablespoons toasted pecans. Cook until golden brown, then transfer the waffle to a baking sheet and keep warm in the oven. Repeat with the remaining batter. Top the waffles with butter and maple syrup.