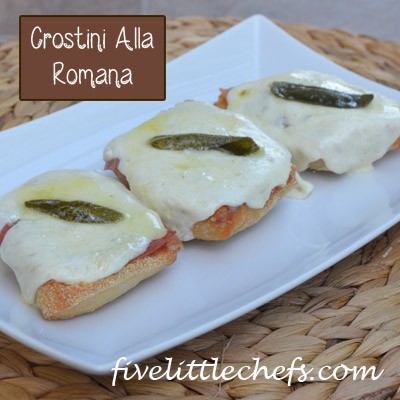 Little Chef A absolutely loves Giada De Laurentiis! Whenever we are watching the Food Network and Giada comes on the excitement level goes through the roof! I quickly hear, “Ooooh I love Giada, she is my favorite!”  What surprises me is the conviction and true passion she has for this show and cooking. It would not come as a surprise to hear that Little Chef A’s recipes will all come from her favorite chef, Giada. The first recipe that was chosen was Crostini Alla Romana. We saw this on an episode and Little Chef A said “We have to make that!”     The first step is to gather all the ingredients.

The second step is the prep work. She started with the bread. The package was opened when immediately Little Chef A said “something smells VERY good.” Over the past year I have noticed this Little Chef in particular has a very good sense of smell. She used a small serrated knife to cut the ciabatta bread on a cutting board. While offering words of encouragement and guidance I realized Little Chef A needed to be told it is fine for the knife to touch the cutting board! That is how you know you cut all the way through the bread. Such a simple lesson.

Little Chef A also repeatedly picked up the bread trying to cut through the last inch in her hand. I was quick to explain if you cut with the ingredient in your hand you can easily cut yourself, it is a lot safer to put the bread on the cutting board no matter how hard it is to cut. These last couple of strokes seemed to always be the hardest.  Of course Little Chef C and D wanted to watch and commented “Look she is cutting the bread all by herself.” They are all so supportive of each other! I love that!

We paused in the prep work to turn on the oven to 375 degrees.

How do you know the oven is ready to put something in it? “When it beeps” she said. Little Chefs do learn by example and observation.  I’m not sure I was very good in explaining this before. But, they have heard me say the oven isn’t ready it hasn’t beeped yet, many many times.

The prosciutto was sliced at the deli counter for us. Next came the fresh mozzarella. These two ingredients were definitely more expensive then the regular meat and cheese we buy for sandwiches!  We have never used either ingredient before. I was surprised to discover at one of my local stores they make fresh mozzarella in house. Unfortunately, they were out until the next day so we opted for one made in California. This time Little Chef A sliced the mozzarella with a butter knife.

Even though the cheese was soft it still was difficult to cut all the way through and to make thin slices. I know now I need to find a child friendly knife!  I have large knives but I don’t feel comfortable allowing my Little Chefs to use them, especially without any practice cutting.

The cookie sheet was filled with the slices of ciabatta bread and put in the oven, after it beeped. Little Chef A put on the oven mitts which I quickly realized were very large. There must be some child size mitts somewhere! Little Chef A was scared to put the bread in the oven fearing she would fall in, so I held onto her waist while she leaned over the door just a bit to push the tray in. (This occurred each time the tray went in and out!) The oven light was kept on to watch the bread being toasted. We discussed what the bread should look like when it was done–toasted like a piece of toast from the toaster. The timer went off after 8 minutes. I asked does it look done?  “It depends on how it looks” she said. Does it look like toast? Do you want it soft in the middle? We pulled the tray out and Little Chef A touched the middle of the ciabatta. It was a little soft. She said “It has to by crunchy if it is toast.” She decided to put it in a little longer. I’m sure it took longer to toast because the recipe called for 1/2″ slices. The slices in the oven were about 1″ thick.

Finally, the bread was sufficiently toasted and the fun part began. Little Chef A was very artistic in the way she covered each slice of bread with prosciutto and mozzarella. I reminded her you want to taste each ingredient with every bite so you want to cover each part of the bread with each ingredient. Little Chef C said, “You are learning to cook all by yourself!” Back into the oven the now topped crostini went.

Little Chef A got out a small saucepan and put in the butter and sage. As she opened the sage she said, “It smells a little spicy.” After pulling off the 6 required leaves and washing her hands she said, “They have a little stuff on them that is hard to get off.”

I had to feel the sage to understand what she was talking about. Sure enough, the sage does have a coating on the outside that transfers to your hands and is hard to get off.

After 8 more minutes in the oven the crostini was pulled out and Little Chef A transferred them to a serving plate with tongs. It was a little tricky to not tip them over! I never realized there was a lot of skill required to use tongs. But, after transferring a couple slices she got the hang of it. Little Chef A then spooned the sage butter over each crostini and her favorite part, from watching the episode, placed one sage leaf on top of each crostini.

The table was set and as Little Chef A was bringing her very first culinary masterpiece to the table she said ” Here comes the best part of the meal!” The pride in her accomplishment was oozing out of her. Several times during the meal she asked, “Raise your hand if you like it.” “Who wants to make this again?” “This is so delicious!” I’m sure her excitement rubbed off onto the other Little Chefs because those crostini’s were devoured with SO many positive comments. The entire dinner conversation was about those crostini’s.

For my own review, Crostini Alla Romana as a whole was delicious. I believe it would have been even more amazing if the bread was cut to 1/2″ as recommended. The mozzarella cheese needed to be melted just a minute or two longer. It  wasn’t quite as gooey as I like. The sage butter needed to be smeared all over the mozzarella, not just spooned a little on each piece. For my second piece I flipped the crostini over and wiped the plate with the mozzarella to coat it with the butter left on the serving platter. I enjoyed my second piece more then my first.

Little Chef A’s experience cooking was a success!!!  She is excited to try another recipe all by herself and my other Little Chefs are excited for their turn!