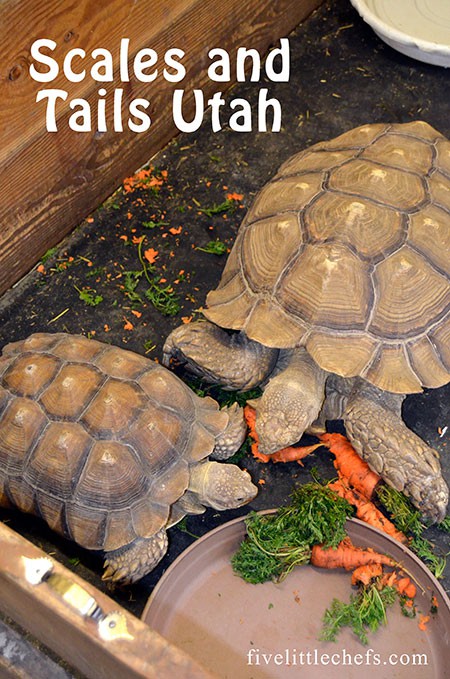 Scales and Tails Utah – Things To Do In Utah

There are so many things to do in Utah. After school this past Wednesday I took my girls to Scales and Tails Utah. This was an opportunity to get up close to turtles, alligators, snakes, lizards and more.

The reason we chose Scales and Tails Utah is because it is temporarily included in the Pass of All Passes so we were able to go for free. It was a little tricky finding the entrance. We turned in on the north side of the building when it would have been easier to enter on the south. Park where you see a cake sign and the parking lot is wide. The minute I saw the front desk is the minute I knew this place was going to be even smaller then I thought. Do NOT bring strollers. They may not even let you in with them because there just isn’t much room to maneuver in there. Without a pass or once this deal is over you are able to visit at very limited hours for a minimal fee. Check their website for times. Once you get into the back with the animals there is a reptile smell but they had doors open and fans blowing to get some air flow. Imagine a pet shop with tanks and tanks of reptiles. That is what you will see. The pathways are narrow between the tanks so a single file line each direction is best.

My little man LOVED the tortoises and turtles. He wanted to watch them for a while and then finally got up the courage to touch them. This happened with each one. If we saw something else and came back to the same turtle the process started again. He would have watched them for a long time. Make sure you find the babies they are so cute.

Little Chef C finally agreed to hold the snake around her neck for a picture. She even had a smile on her face. Amazing what I can get my kids to do for a picture. Now she won’t be as scared next time–in that environment only. That elbow in the picture is a staff member- always close, watching and attentive.

All in all I am happy we were able to experience Scales and Tails Utah. We would not have found this place on our own. Based upon what I saw and heard I would recommend hiring Scales and Tails Utah for a party. Let them bring the stars to you where it isn’t so crowded, or arrange a time to go to the shop when you won’t be competing with many people in a small space.

Create a Blurb Photobook for your Memories

How to Make a Bookmark with Felt and Ribbon