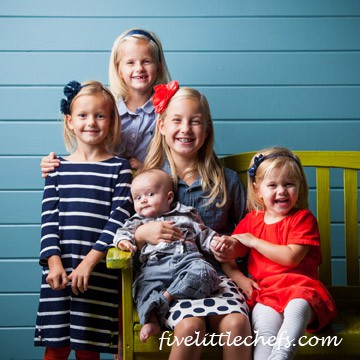 How are the other girls?

I have been asked how the older girls are doing and how much do they know and understand. On Saturday, the day after we found out, we explained in very simple terms to all three what was going to happen in the near future. Later that day I was with just the 2 older girls and told them more, still leaving out the really scary details. My oldest was making frightening faces as I was explaining. I didn’t think she was going to be ok. She is my super sensitive, emotionally tender child. But, she said she was fine and immediately went on talking about something else. My second didn’t say anything but it didn’t seem to phase her either.

I left that conversation thinking they don’t get it at all. Of course I do not want them to understand everything, but they do need to realize things aren’t going to be the same. We will have some big adjustments to our normal routine. We will be making a new normal.

The next day, Sunday, at dinner we were talking about the schedule for the week. At this point we didn’t know any dates and were expecting another type of MRI before the surgery date which most likely would be this week. I explained we would try to get them to all their soccer practices, but we might not be able to depending on what we needed to do to get Haley well. My oldest said, “Its ok, right everyone, because a brain tumor is more important then soccer.” Jeremy and I looked at each other both thinking we never thought we would hear those two things put together …ever.

They all pray for Haley now and are so cute and tender about it. My third who I wasn’t sure heard a word of the explaining prayed that Haley would not feel hurt when her head was cut open. I assure them it is ok to be scared but what do we do when we are scared…we pray.

Someone suggested we take a family picture. That was a hard one for me to hear. But, we quickly took one on Monday. Our next pictures will most likely be featuring Haley with a new hairstyle. (If only we had known this news one week earlier the oldest wouldn’t have braces. So many things have happened in the last few weeks!) When we were setting up the first pose Haley had a seizure. Because of my placement I could not get up to help. Thankfully my two oldest girls are very good at helping her and were able to do that. The photographer was thrown off and asked if everything was ok. My oldest said immediately,”she has a brain tumor.” It made Jeremy and I laugh. She was so open, calm and candid about it. We were having a hard time getting those words out, but not her. They slid right out as if a brain tumor isn’t a big deal. I am glad it isn’t a big deal to the girls. They don’t need to bear that at such a young age.

I love the babies eyes. He makes those crazy eyes all the time! That really is his authentic look.

Everyday I ask them if they have any questions about what is going to happen. My second was concerned today if Haley would be awake during the surgery and how long it would take.  I don’t think they understand completely because they don’t see her sick. Besides having the seizures they don’t see her as a sick person. They associate sick with someone laying down and in bed not dancing, doing gymnastics, climbing and teasing her older sisters. Unfortunately because of this when they see Haley after the surgery with a big “owie” on her head they will be shocked. I need to prepare them for what she will look like now so they have time to process it and ask more questions.

How are the other girls? They are fine. This has not affected them. They have one more story to tell, matter of factly, and they have one more thing to pray for. A brain tumor is not a big deal through their eyes. I am thankful for that.

It's all in the details.

4 Replies to "How are the other girls?"