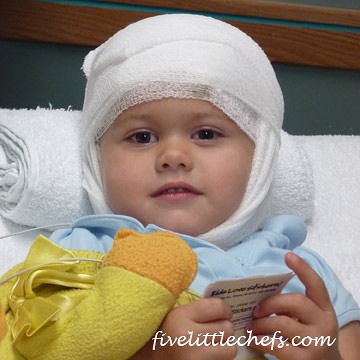 We had the appointments scheduled for the two specialists so we were just waiting but not necessarily worried. One night we were watching the news when they talked about someone going in for brain surgery to remove a tumor. I remember thinking she is going to have a brain tumor, but then thought I was just being crazy.

I took her in for her Neurology appointment. We first saw the PA who was doing some motor tests with Haley. He said, “touch my finger, touch your nose, touch my finger, touch your nose” while moving his finger from the right to the left. She did it perfectly with one hand. Then he wanted her to switch hands and repeat the test. He started again, “touch your nose, touch my finger.”  This time she left her finger on her nose, leaned over and touched his finger with her finger still on her nose! He said it again and she did the same thing. He said it a third time while trying to hold her back so she couldn’t lean forward. The next time he asked she left her finger on her nose and used her other hand to touch his finger! He said that was good enough and stopped the test. I thought it was all very hilarious!

The Doctor came in and based on previous information he received he had one working theory. When I said I had a video of her episodes he watched it and changed his mind. Now he was sure it was a seizure. He was going to order an EEG to verify that theory. I was not pleased with that theory because of course I didn’t want something to be wrong with my child, especially something that would last for years or possibly her lifetime.

About a week later I took Haley in for the EEG. That was a very difficult test. I had to put her to bed 2 hours later at night, then wake her up 2 hours earlier in the morning and keep her awake until the test. They want her to fall asleep for 20 minutes of the test. I thought for sure she was going to fall asleep in the car, but luckily I was able to just barely keep her awake. She was fine in the test when we had others in the room doing their various jobs. They gave her “Rapunzel hair” as they called it because of all the wires that went from the “stickers” to the machine. She sat so still while they were being applied. They gave her a blanket the boy scouts made and she was thrilled! She was fine when they wrapped her head with gauze. She was fine when they did a flashing light test.

They left the room they dimmed the lights and wanted her to fall asleep. She was fine for just a few minutes, then she became super restless. She didn’t want me to calm her down. She didn’t want to read books or sing songs. Eventually she didn’t even want me to touch her. She kept saying, “I want it off!” The entire time she was being watched by a monitor. When they thought she had enough or the time was up, I’m not sure which one, they came back in. She had almost maneuvered the gauze wrap off her head. They came in and she was a perfect child again sitting still so they could take everything off.

Just to keep this entirely honest, I did have the baby with me. We were running to make it to the appointment on time so when we got there I needed to feed him. During the test he decided to grace us with an exploding diaper the same time Haley was wanting it off and wetting the bed. But he was just going to have to wait because I still needed to try calming Haley down to sleep. Do I even need to say I was happy to leave the hospital and be done with that test? She was happy to leave with her new prized possession, the blanket.

Remember we still had an appointment set with GI. I took her to that appointment on a Monday morning. We should have received the test results from the EEG but we were having a major communication problem. Since we were at the same clinic I asked the front desk about getting those results. Luckily our Neurologist was in clinic that day. We went back to the room to wait for GI when the Neurologist surprised me by coming into the room. He seemed surprised we had not received the results because he also ordered more tests. He said the results were abnormal in the Occipital lobe. That meant yes these episodes were seizures. We needed to get an MRI next which would tell us if these were something she would grow out of or not. We also talked about medication and because she was having 6-8 seizures a day we thought it was a good idea.

Over the next few days her seizures decreased which made us very happy. On Friday of the same week we had the MRI. I told Haley we had to go to the hospital again and she asked, “I get another blanket?” She is still excited to go to her doctors appointment which is a big mouthful! When I was driving Haley to the hospital I was thinking we are not going to get good results.

How the brain tumor discovery began.

The first of many MRI's.