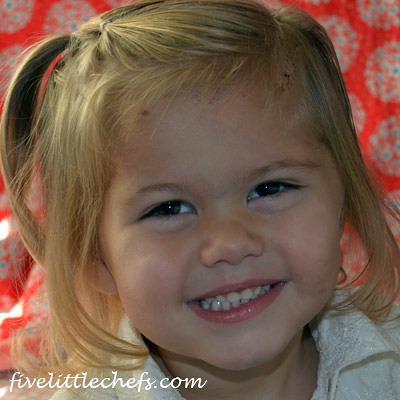 Today was a cheese day. Before the surgery she would choose to have a cheese stick and then only take one or two bites. Today she ate 4 cheese sticks in a row before I could convince her to choose something else. She ate 3 more at other times of the day. Strange. Sometimes she looks at food in wonder. It appears that she doesn’t know what it is even though she has eaten that food previously. She is afraid to taste it and then does, likes it and wants more. I wonder if this is why she has been choosing to eat only one type of food a day. She is starting to be a little more adventurous trying more foods. She still does not want to feed herself more then a couple bites.

She is funnier and happier then she has ever been but only in the morning and very late at night. During the day she has 90 minutes of happy play time and then 30 minutes of being grumpy crying, being angry and hiding because she does not want to be seen by anyone. During this time she wants to start watching Rapunzel yet one more time. I don’t normally let my kids watch more then one show each day, but this seems to be her coping mechanism right now so we are allowing it.

She does not remember the names of things which frustrates her. This is also what causes some of her melt downs. I ask her to tell me in words why she is crying and why she is upset and she responds, “I don’t know it.” This morning she couldn’t remember the names of a bowl and spoon. At lunch I showed her the bowl and spoon again asking her what these are called, this time she was able to tell me. This does happen quite frequently. It appears she just needs a reminder and then is able to retain the information.

Sometimes she is being funny because she doesn’t know the right words. She purposely calls things by the wrong name. At first I thought she was doing it on purpose to get a laugh but then I caught on and asked her what is this really and she said, “I don’t know.”

I hope her memory gets better. It is hard to watch knowing what she was like before. At least she is little and it isn’t that obvious to others. She has plenty of time to relearn or remember.