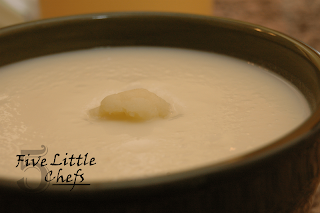 The Pea Soup went over so well Little Chef C decided to make Cauliflower Soup slso from Chef Robert. The final product should have been the soup with lobster in the middle and an herb-lemon oil drizzle. We had the cauliflower head, but not the lobster. Instead of packing everyone up and going to the store we decided to make it without the lobster. We had the intention of making the herb-lemon oil drizzle, but we completely forgot until after we began eating! 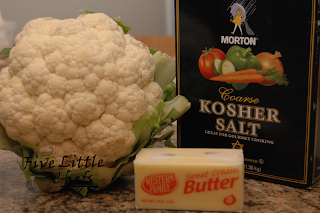 I verbally instructed Little Chef C to cut the “trees” off the head. Having never done this before, and obviously having never seen me do this, she starting sawing back and forth on the side making cauliflower granules. After some further, more detailed instruction Little Chef C knew what she was doing but she still had a difficult time cutting the “trees” off the head. My guess is it was a combination of the knife being not so great and the pure awkwardness of the task. 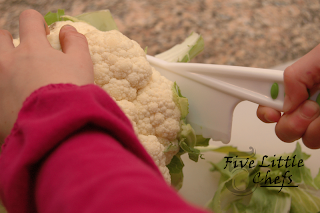 In a saucepan she added salt, water and the cauliflower “trees”. Soon the water started to boil. She was very curious about the steam. She felt it with her hand and realized it was “super hot.”

After Little Chef C was able to easily poke through the cauliflower she drained it, with a little help, into the colander with a bowl catching the liquid. Afterward she poured it back into the saucepan, with a little help after she said, “you do it with me.” 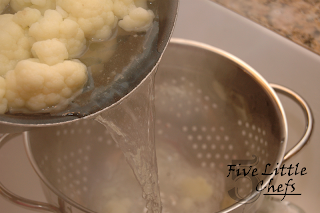 Almost all of the reserved liquid was poured back into the saucepan. She was able to do that by herself. Using the immersion blender was her favorite part of this recipe. “This is fun” she said. Even after explaining the blender needs to stay in the liquid that didn’t happen. One drop spit out of the bowl and landed on her eye. It surprised her, but she thought it was so funny! Each recipe we make has a key moment that helps them remember their experience. I knew right away this was going to be that moment. 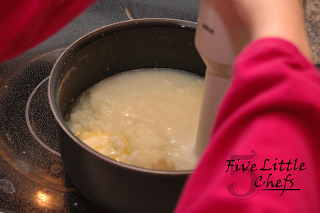 She then poured it though the strainer, but wasn’t sure why it didn’t go right through so quickly. She liked using a spoon to move it around to help it go down a little faster! Sometimes Little Chefs don’t have much patience.

This recipe was pretty simple.  Little Chef C only needed help lifting the heavy saucepan many times. All the actual stirring and cutting and blending she was able to do alone. At the table, after realizing we forgot to make the herb-lemon sauce, we asked who liked the soup. Little Chef A said, “It needs a little more flavoring.” She got out the salt and pepper and added it to her soup. “Much better” she said. Of course the other Little Chefs had to follow. Little Chef D is always VERY heavy handed with the salt and pepper. All of a sudden she added so much salt it was inedible. Nevertheless, this soup was a hit. I think it was more successful then the Pea Soup!

Cauliflower Soup
Robert Irvine
1 large head of cauliflower
1 tablespoon kosher salt
4 tablespoons (1/2 stick) unsalted butter, at room temperature
Remove and discard the outer leaves of the cauliflower, cut out the core, and separate into florets. Put the cauliflower florets in a large saucepan with the salt and 6 cups of water and bring to a boil over high heat. Maintain a lively simmer and cook for 8 to 12 minutes, or until very tender. Drain through a sieve placed over a bowl to reserve the cooking liquid. Let cool for a few minutes, reserve 6 cauliflower florets for garnish, and then put the rest of the cauliflower and 2 1/2 cups of the reserved cooking liquid back into the pot. Add the butter and puree until smooth, using an immersion blender. Add more of the cooking liquid if the soup is too thick, then strain again through a fine-mesh sieve. The soup should be silky and just coat the back of a spoon. Taste and season with salt if needed. Set aside and keep warm, or let cool and refrigerate, covered, for up to 4 hours and reheat before serving.

No Replies to "Cauliflower Soup"